Paul Curtis, the Birmingham-based founder of vaping brand Zeus Juice has been named as Family Business Entrepreneur of the Year for the Midlands at the Great British Entrepreneur Awards in a ceremony held on 22 November at Grosvenor House in London. 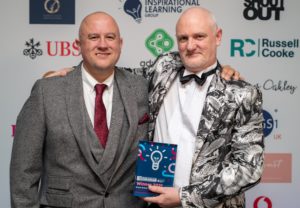 Zeus Juice is a family-run brand, founded and based in Birmingham, that has evolved to become one of the UK’s premium manufacturers of e-liquids and merchandise. Zeus’ mission has always been to offer a practical alternative for those looking to quit smoking traditional cigarettes without compromising on satisfaction, flavour or taste through innovation and quality.

Established in 2011, Zeus now offers five different ranges to cover all demographics including the original ‘Zeus Juice’ and the newly launched ‘Tobacco Blends’ via zeusjuice.uk, 650 independent retailers, distributors and convenience stores within the UK as well as five other countries internationally. Additionally, Zeus offers its Birmingham-based manufacturing and laboratory services to multiple businesses within the health and beauty sectors.

Paul Curtis commented, “I am thrilled to have received this award and for Zeus Juice to be recognised by the Great British Entrepreneur Awards. When I set up the business back in 2011, my focus was to create a healthier alternative to smoking. Ten years later, we are proud to create quality products, provide local jobs and support our community to help change people’s lives for the better.”

The judging panel said that Paul was a worthy winner: “Paul is very inspiring. We were particularly fond of his tenacity and resilience. Even at the height of extreme grief he still continued with the business and decided to pursue his goals in his wife’s name.”

In partnership with Starling Bank, the awards ceremony saw 159 entrepreneurs across the UK recognised for their entrepreneurial stories and achievements over the last year. The awards were judged by a panel of industry experts and leaders of influential UK businesses, including some of the prize winners from previous years.

Francesca James, founder of the Great British Entrepreneur Awards, spoke highly of the entrepreneurial talent coming out of this year’s cohort: “It was fantastic to hear so many inspiring business stories after a difficult few years, and even better to have been able to invite all of our finalists to the in-person ceremony and celebrate together.

“With more than 1,200 attending, the evening was a real snapshot of the UK economy. The winners were thoroughly deserving, overcoming some stiff competition from their fellow finalists, and we look forward to welcoming them into our alumni community and seeing what they do next. It’s always exciting to watch our previous winners go on to achieve amazing things and I don’t expect any less from this year’s award recipients, who we will support all the way.”

The Great British Entrepreneur Awards launched in 2012 to celebrate the best of British enterprise and over the last decade, the Awards has celebrated some household names including Julie Deane OBE of Cambridge Satchel Co, Alan and Juliet Barratt of Grenade and Shaun Pulfrey of Tangle Teezer. Its most recent headline-grabbing success story is its previous winner, and speaker at this year’s
event, Steven Bartlett, who in May was announced as the youngest ever Dragon on BBC’s Dragons Den.