People who smoke often wish there was a magic wand – something to take the pain away, something to make it a breeze. They describe stopping smoking as the hardest thing they’ve ever done, and there are good reasons for that. Many smokers have never known a time in their adult life when they haven’t had a cigarette to hand – parties, nights out, when they’re thinking, working, playing, wanting a break from routine, driving the car, sad times, lonely times, angry times, happy times. On the beach, in the park, after sex, after a good meal –  a smoked cigarette has always been there for them, so it’s much more than nicotine dependence that keeps them smoking, it’s because it’s such a big part of their lives.

But it’s a killer. We all know – however hard some may try and convince themselves that they’re the ones who will get away with it -that smoking causes the untimely death of half its users, and results in long-term disability for many more.

That’s why people will come into vape shops looking for a way out of smoking. They might have been encouraged to try a mate’s vape. They might have an old one at the back of the kitchen drawer and want something better, more satisfying.

Every new vaper who buys something from a vape shop is a potential ex-smoker. But like learning to drive, gaining a new skill, preparing for doing a first 5K run, there can be many slips and mistakes along the way. It can be disheartening getting it wrong, and that’s where the Smoke Free app comes in.  We have years of experience helping people stop smoking, and we have heaps of tools for people to use. We’ve had over 175,000 5-star reviews so that’s a lot of happy users!

We don’t nag, we don’t scare people. We offer tried and tested features that gently coach people in the art and science of quitting. Some of this is available free of charge, but people can upgrade to the full version for less per month than the price of one single packet of cigarettes. They can end their subscription whenever they like. They’ll get access to many more features, including live advice from trained and experienced advisors (who incidentally were all recruited for their skills in smoking cessation AND their knowledge about vaping).

So every customer at UKVIA-affiliated outlets should download and try the Smoke Free app www.smokefreeapp.com when they buy their first vape, for their best chance of stopping smoking – it’s a powerful combination that can turn someone from smoker to smoke free – they’ll wonder why they didn’t do it sooner!

(Vape shop owners -Posters with a dedicated QR code are available from louise.ross@smokefree.ai ) 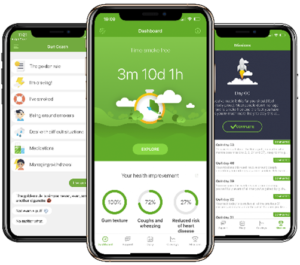