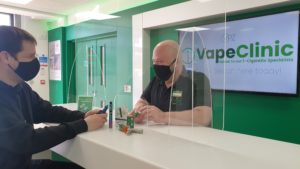 Very few former smokers received advice from convenience stores and supermarkets when considering vaping as a method to quit their smoking habits, according to a new study.

Research conducted by the UK Vaping Industry Association (UKVIA) into the level, quality and source of advice that smokers received when looking to switch to vaping for the first time showed that only 2.8% and 1.1% got guidance from a supermarket and convenience store respectively. Specialist vape retail stores proved to be the main source of advice (48.9%), followed by friends and family (35.2%) and another vaper (22.7%).

In terms of quality of advice, 54.4 % of those who had bought their first vape from a specialist vape store said that the support they received was extremely informative and supportive and this compared with online retail (25%), convenience stores (14.8%) and supermarkets (14.3%).

Of the current vapers interviewed 57.4% said that advice was instrumental in them quitting their smoking habits.

John Dunne, director general of the UKVIA, said: “The whole retail sector has a key role to play in advising smokers on a successful switch to vaping which is considerably less harmful than smoking.  However, our research suggests that convenience stores and supermarkets could do a lot more to support smokers who are considering transitioning to vaping.

“With significant numbers of current vapers indicating that advice was critical to them quitting their habits and vaping now acknowledged widely as being a major contributor to the government’s smokefree targets, convenience outlets and the multiples could gain more loyal vape customers and market share if they invested in developing the knowledge of their staff about the vape products that they sell. This will help smokers make informed decisions about the type of vape devices, nicotine content and flavours that would give them the best chance of a successful quit.”

The low level of advice given out by convenience stores and supermarkets was also reflected in where smokers turned vapers purchased their first vape. Nearly 59% bought their first device from a specialist store compared to 15% (convenience/independent retailer) and just 4% (supermarket).

The research was undertaken during VApril, the largest education campaign for smokers interested in using vaping as a quit method. Coordinated by the UKVIA, it is now run worldwide during April.